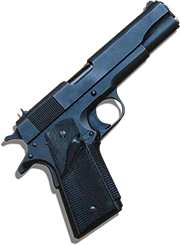 My son is a Marine Infantry Man serving in Afghanistan.  In August he asked me to get him some gun oil for his weapon.  Asked for Rem Oil.  I went to the Totem Pole In Union, S.C. and the Grandson of the owner gave me a small bottle of your synthethic gun cleaner and lubricant to send to my son.  Said for me to have him try it out and give a report back, how it performs in combat.  I sent it to him in August and told him to try it out and give me a report on the lubricants performance.

He called me on 14 Oct 2010 and asked me to get him some more and send it to him.  He loves the your product, it has performed great, cleans his weapon and lubricates great.  Has no jamming works in combat, he would rather use your Synthetic GCL than any other weapons lubricant or oil. Even says he want to use it when he gets back.  He is using it in a dry and dusty environment, even in flooded fields at times, always works.  Yes he is in combat all the time.  He is the Designated Marksman for his squad, also permanent Point Man, so his weapon has to work every time.  Yes for his protection and his squads protection.

Like I said your Lock ‘n’ Load GCL is what he wants.
I have gotten another bottle for him and it is on the way.

Thanks for you great product, it has probably saved his life.

May 9, 2008 excerpt from the US Concealed Carry “Armed American Report”

​I’d like to follow up last week’s gun cleaning review with a review of a little gun oil that I received in the mail.  It’s made by a company called “Interstate Lubricants”.  Their website is http://interstatelube.com

​As you can see, this stuff is red and transparent.  It’s actually pretty watery too—a little more so than engine oil.  It’s called “ATL Synthetic Gun Cleaner and Lubricant”.  The directions say to ‘Clean gun as usual. Wipe Dry. Reapply a thin coat, and allow to air dry’.

​One thing that caught my attention right away about this stuff, is how deeply penetrating it is.  A tiny drop on metal, and it spreads and covers its entire surface.  Note that this also makes it kind of messy!  As it drips out of the spout on the bottle, it spreads out to cover the outside of the cap.  So when you go to twist the cap shut it to close it, your fingers get covered with the stuff!  Luckily, it washes off easily, and it doesn’t stink.  It smells like something…but it’s a non-chemical, faint smell.

​Now I gotta be honest—I didn’t really notice much of a difference when I applied this to my GLOCK—but then, I never really do. think it’s with the way a GLOCK is designed to work with very, very little lube. BUT—I used it in a few semi-auto rifles, and “Wow”…honestly, it quieted the actions down and made them feel much smoother. On the product’s website, it advertises benefits such as water separation an durability, which sounds great—but I don’t really have the means to test this.

What I’d LOVE to see is some of the most highly recommended makers of Gun-Lube to go head to head and test to see whose Lube is the best.  I tell you what—I’ll try to find something like this and feature it right here in the ArmedAmerican Report.

​From what I can tell—ATL Gun Cleaner and Lube is a winner.  If you’re in search for some new Gun Lube– you might want to give it a shot.